I remember as a child watching Michelle Yeoh doing kung fu movies along side Jackie Chan, etc. She needs a minimally invasive bunionectomy bad before she gets major arthritis in her big toe joint then forget the high heel after a fusion.  Fusion is when the big toe joint or any joint for that matter is locked via plates and screws by a surgeon to limit motion, restore anatomy as well as remove diseased tissue.

Malaysian-born Chinese actress Michelle Yeoh, popularly known for performing her own stunts in the Hong Kong action films, caused a stir when she was seen with her heavily corned feet at an appearance. Chosen as among the 50 Most Beautiful People in the World in 1997, the Crouching Tiger, Hidden Dragon star is gorgeous, but her feet are another issue, especially those bunions.
Feet constantly stuffed in very tight stilettos may look stylish but can be unforgiving to the toes. Women do love their high heels but wearing them all the time may lead to foot problems and foot pain. The foot conditions associated with these towering shoes include corns, calluses, hammertoes, and the most commonly seen bunion. The condition often gets worse over time but surprisingly, almost half of women admit to wearing a pair of shoes that they liked even if it gave them discomfort. 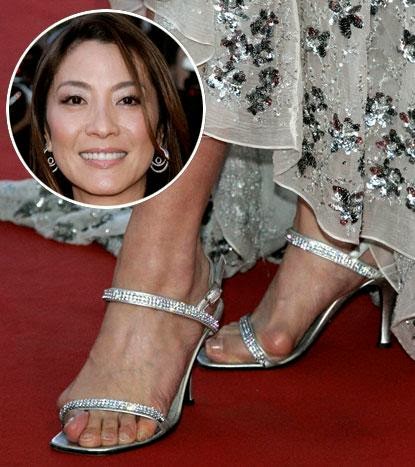 Michelle Yeoh,as a fan and a foot and ankle surgeon, give my office a call about the minimally invasive bunionectomy:    239 430 3668.